Jerusalem
boxed text
Keys to the front door
The various versions of Christianity cannot agree who should hold the keys to the Church of the Holy Sepulchre - so a local Muslim family hold them, and unlock and lock the church everyday.

I stayed in a crumbling old hotel (Hotel East New Imperial) in Old Jerusalem just inside the city walls, to the left of Jaffa Gate. The hotel had seen better days, but you could see that in the past it was one of THE hotels in Jerusalem. 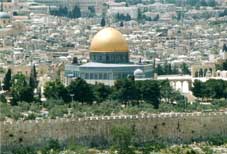 The Dome of the Rock, Jerusalem.

Old Jerusalem is a wonderful city - if there there's anywhere you can see history on the streets - it's here! The Western Wall - the Dome of the Rock (a truly beautiful building) - the Church of the Holy Sepulchre - Three major sites for three major religions, and all with in a stones throw of each other (any maybe that's part of the problem!)

I made it out to the Mount of Olives and got some great photos of the old city, and a walk around the city walls is a "must do".

internal links:
More Photos
Israel
Site Map - find it here
Page Images - want to know more about the images at the top of the pages?