Up for breakfast at 08:30 and appeared to beat most of the other guests to the buffet. Headed out to get a few photos without all the tourists. Unsurprisingly there aren't that many people around, I'm at the bell tower at 09:20 ready for the doors to open at 09:30. I pay my 8 Euros and start the climb. Luckily there aren't that many people on the steps, and there are stops on the way. Near the top is a room with a huge drum with spikes sticking out that rotates and controls the bell chimes. It's like a much bigger version of a wind up musical box! It plays every quarter of an hour. 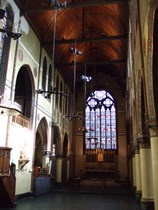 Onward up to the top of the tower were it's rather cold and very windy. I take photos and then head down. The next stop is to see the 'Blood of Christ' church - very impressive and there's a silver reliquary that holds the 'blood'. Back to the hotel, checkout and head for the station. Jump on the 11:27 express, it's other double decker and gets into Ghent at 12:00. I decide to forego the easy tram trip and walk into town along the river.

I arrive at my hotel rather early, but the good news is that my room is ready. The hotel is an old monastery, and I've elected to take one of the cheaper rooms which has no en-suite, and I guess is quite close to what it was like while it was a working monastery. No TV, no radio. The place has it's own chapel, with stained glass windows etc.

Head out to have a look around Ghent, I'm sure that I've (at the least) driven through Ghent in the past. It's all very pleasant, with lots of Flemish buildings, bell towers and twisting streets. I pay 3 Euros to go up the bell tower (two in one day!) It's windy and cold at the top of this one as well!

Nipped out in the evening to see what the place looked like in the dark.