Up for breakfast at 08:00, and out the door by 08:15! walked up to the Bazzar (Kapali Carsi) - I forgot my planet, but did manage to find the place. It was still early, so many of the traders hadn't opened up. It had the same feel as the bazzars in Dubai and Jerusalem, with exactly the same sort of things being sold! 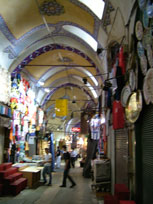 Walked back to my hotel, grabbed my stuff, checked out and ordered a taxi to get me back to the airport. Speed limits are posted in kph, but everyone drives as if they are mph!

I arrived at the airport with hours to spare, so I went looking for the Lufthansa desks before they appeared on the information board - I found them, but there was on-one at them, after hanging around for a bit the check-in staff appeared. I tried for an upgrade, but was told to try asking at the gate.

I did managed to get into the Business Lounge - free food, drink, and Internet access! I did ask at the gate, and the woman still said no, but said she'd ensure that the seat next to me was empty. Fare enough!

When I got on board I found I had an aisle seat with the two seats next to me empty - and since the rest of the plane was packed it was a great result!

The flight was smooth, until we came into Frankfurt (there must be huge holes in the sky around that airport!), at least we got a jetway this time. I tried to get a refund on the FRA->LCY section of ticket, but no joy - well, it was a cheap flight!

Got out of the airport, and into the railway station and caught my ICE train - it was very quick in Germany, but as soon as we got across the border into the Netherlands, then everything slowed down. Got to see Cologne Cathedral from the train window.

Arrived in Utrecht, and checked into the nh Hotel - met up with the others from work, and spent the evening in the Railroad bar on the 22nd floor of the hotel, overlooking the railway station.