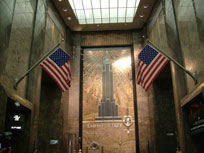 Inside the Empire State

Up early, and over to the Empire State building, almost first in the queue to go up, got chatting to a guy from NZ who is over visiting his wife - she's part of the NZ team at the United Nations.

The view from the top is breathtaking - you can see the whole of Manhattan below you. Loads of Photos! Then it was back to the Hotel to pack and walk up to Grand Central Station to catch my bus out to JFK.

Arrived at JFK rather early, but I guess it's better that way - checked in at the Business desk, and asked for an upgrade, but no dice - the flight is full. While waiting at the gate I was chatting to a mother and daughter from Northern Ireland, they had been over on a pre-christmas shopping trip, and spent over $4000! Then I heard my name being called over the intercom, and for me to report to the Gate. They took my boarding pass and ripped it up, and before I could say a thing, handed me another - I was about to say "hey, hang on - I struggled hard for that Economy Plus seat", when I noticed that the new boarding pass had a single digit seat number. I just smiled and said thank you, I'd been bumped up to Business Class! Wow, Cool, Couldn't believe it!

As I took my seat on the flight, I noticed that I didn't have the photograph of the Brooklyn Bridge that I got in Times Square. Bother. I asked a crew member if I could get off and see if I had left it at the Gate, and to my amazement she said yes! I went back to where I'd been sitting, but there was no sign of the photo - oh well!

The flight was a bit bumpy, but not too bad. I watched "King Arthur". Oh the take off was delayed due to a United computer crash, it was the one that works out the total weight of the plane, so they had to do it manually.