Around the World II 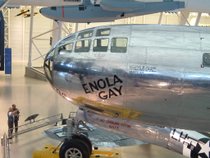 Up late - got all my stuff together and headed out to the Aerospace museum with Em and David. Very cool - they have a French Concorde, an SR-71 and Enola Gay.

Em and David dropped me off at the hotel, after a quick run around the local supermarket. Ben rang so I got to see his pad, and we grabbed something to eat. The restaurant had a power cut due to a huge electrical storm just as we were leaving.