It was an early start, I checked out of the Guesthouse by 8:30, but left my bag in the left luggage - I didn't really want to drag it around with me all day. I got an all day Metro ticket, but found out that it's only valid after 9:30, so I had to go back and get a single to get me downtown. My first stop was to the Bureau of Engraving and Printing - I did the guided tour at 9am, and got to see about 6 million dollars being printed - and no they don't give free samples away (they got that out of the way within about 2 minutes of the start of the tour).

After that it was a walk across the National Mall to the National Museum of American History - I went to see the computing exhibit, but a lot of it was closed. However I did get to see the flag that inspired "The Star Spangled Banner" - a flag that was flying in 1812 when the English tried to repeal the Declaration of Independence. It is a huge flag, with quite a bit of repair work being done to it. 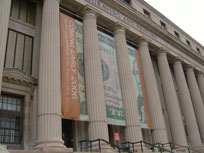 Bureau of Engraving and Printing

Then it was back up the Guesthouse, and out to Shady Grove on the Metro, where my pal picked me up and drove me to Dulles. The queue to check-in was very long, and it took me most of an hour to do that and get through security. The flight was full, but I managed to get an upgrade to Business. Boarding started at 17:20, and when I next looked at my watch I noticed that it was 18:10, some time after we were scheduled to leave. Then the Captain came on the PA - an Hydraulic pump was leaking, and they would have to replace it, so every got off the plane, and got a $5 food voucher. WooHoo!

We eventually got back on the plane at 22:20, but there was a further delay, as someone who had jumped ship had to have their luggage removed from the cargo hold. (I hope they burnt it!) After that it was 23:20 by the time we took off. So what was supposed to be a 06:20 arrival in LHR, turned into a 12:20 arrival - however I did get through customs, and skipped Baggage Reclaim (as usual).